As a skier, one of my favorite annual traditions is the large guy’s trip I take each year with 6-7 of my college buddies.

We all ski at remarkably similar ability levels, with similar mindsets on the mountain. (Namely, that if you’re paying money for lift tickets, you might as well get your money’s worth! For us, that means always grabbing first chair and then skiing until the legs or conditions can handle no more, which rarely occurs before 4 PM!)

So when the group finally decided that an early March three-day exploration of Alta, Snowbird, Solitude, and Brighton was in order, I got excited.

When we booked a comfortable condo in Cottonwood Heights, Utah, just minutes from all four of those resorts, I got even more excited.

While I had previously snuck in a quick weekend at half of the potential resorts on the menu, for the majority of the group, this would be their first experience with what’s arguably the mecca of serious United States skiing.

While I won’t bore you with the details of the constant ball-busting and inside joking that only a group of college ski buddies could endure, what follows is all the inside scoop that this group uncovered while exploring these mountains during a Wednesday to Friday ski venture during the first week of March.

Wanting to remain flexible, we bought ourselves the Ski City Super Pass, which grants access to any of the four Cottonwood Canyons resorts (and is valid for Solitude & Brighton in the same day.)

The mountains had received 8-11 inches on Sunday, but the forecast was calling for warm bluebird days with no more snow through the week. So, we grabbed some thinner skis than the area typically demands, crossed our fingers that the snow quality would hold through the week, and got to skiing!

Day 1: Bluebird leftovers at Solitude (and a bit of Brighton)

Not quite sure what to expect, we pulled into the Moonbeam Parking Lot nearly 30 minutes before opening. We’d clearly overprepared – our SUV couldn’t have been more than the 10th car in the lot, and we easily grabbed a front-row spot, just steps from the village and lifts.

We paid our controversial discounted parking fee ($5 because we carpooled, down from $20 for solo drivers) and found ourselves second in the liftline, waiting for the gates to drop.

This was my first time at Solitude, and I was immediately struck by the vibe. No doubt, Solitude oozes the feeling of a cool, smaller mountain with a true local’s vibe.

Having heard so much about the mountain’s steep groomers, we spent the first several runs lapping the Eagle Express lift. As advertised, Challenger, Sundancer, and Inspiration were steep, fast groomers. And tons of fun!

We explored around the various lifts for the rest of the morning. Despite not having snowed in two days, we found good leftovers under the Powerhorn II lift, but the big standouts were Headwall Forest and Corner Chute, which we lapped again and again.

We also made it to Honeycomb Canyon, and loved the remote, side-country experience. Not to mention the deepest snow of the day!

By 1:00, having seen most of Solitude and curious about its neighbor next door, we skied the SolBright connection into Brighton, where we grabbed a few laps under the Milly Lift.

At Brighton, we immediately noticed the stereotype as a “Snowboarder’s Mountain” to be true; skiers were certainly the minority here to the boarders, many of whom seemed to enjoy tricking off any lip in sight and seeing how close they could buzz by their rival two-plankers. While we enjoyed the terrain, our group of skiers definitely enjoyed the vibe at Solitude better, so we skied back after just a few runs.

We closed the day with a last run through Honeycomb Canyon, before settling into the sunny Moonbeam patio, where we soaked up the sunshine and an Apres beer or two.

After a quick and uneventful drive through the Little Cottonwood Canyon, we lined up for the Tram at 8:55 AM. We grabbed the second car up and found ourselves at the top of the mountain by 9:20.

We started the day ripping down the legendarily steep and fast black groomer, Regulator Johnson. On our first drop-in, we were greeted with blue skies, fresh corduroy, and… not another skier in sight! Perfect conditions for super wide carving and letting the skis fly! An absolute thriller, and many agreed these laps may have been the runs of the trip.

The trend of low crowds continued. We spent the rest of the day skiing right up to every lift, with zero lines. (The only exception being Mineral Basin at noon, where we timed a 7 minute line that quickly died down after lunch)

Every run seemed empty and wide open, and our group had an absolute blast spending the morning exploring tons of terrain around Gadzoom, Gad II, and Mineral Basin. After lunch, the fun continued as we popped in and out of bumps and groomers off Peruvian Express – over 2,000 feet of long, continuous skiing – before heading through the tunnel to Mineral Basin for the afternoon. Beautiful stuff!

Conditions help up surprisingly well, too. For a warm bluebird day, we found soft snow and even several spots of corn snow.

Day 3: Hunting for the good stuff at Alta

What’s better than a morning spent lapping Collins and Wildcat at the legendary Alta Ski Area?

Not much, as this Friday morning reminded me.

With 5-6 laps under our belt, we unloaded Collins and traversed to Yellow Trail, which brought us fun bumps and gullies all the way down to the Albion Base.

By 10:30 AM, a line of about 5-10 minutes looked to be forming on Sugarloaf Lift, so we decided now was as good of time as any to take a hike somewhere quieter. We bootpacked to Catherine’s Area, where we explored So Long over the course of a 30-minute side-country adventure.

After lunch, Sugarloaf lines had died down to a modest 3-4 minutes, so we spent some time exploring around Razorback, Extrovert, and Chartreuse. And yet, as we rode Sugarloaf up to the peak each run, we continued to catching glimpses of the huge Devil’s Castle bowl and its vast fields of fluffy white stuff. 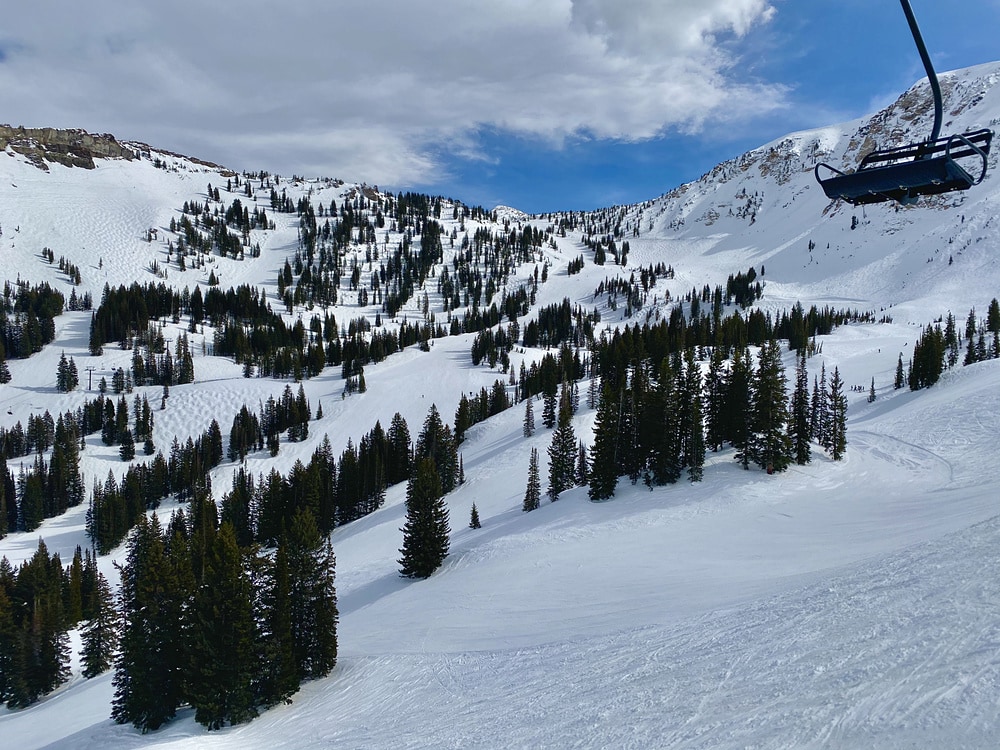 At a certain point, the Devil’s siren call was too much to ignore, so we made the traverse and dropped in on what we all agreed was the run of the day. We especially enjoyed how Devil’s Castle funneled into some mellow and playful trees near Supreme Access.

Legs sufficiently tired from the hike, we spent the last few hours of the afternoon further exploring the Wildcat area, some early drop ins off the High Traverse, and some soft snow runs off the Ballroom traverse, before eventually settling into some pitchers of beer at the legendary Goldminer’s Saloon.

Couldn’t have ended a great trip in a better way!

Going into it, our group was a little concerned about the crowds at these popular, easy to access mountains, but the lack of fresh snow turned into both a blessing and a curse. Despite not hitting any deep powder turns and battling a few icy sections, we did luck into some beautiful bluebird views and, more importantly, vacant resorts.

We also agreed the order of approach was the right call. Solitude served as a fantastic warmup on day one. (Had we scheduled differently, we suspect Solitude may have felt like too much of a downgrade relative to the world-class Alta or Snowbird.)

The overall highlight of the tip? Snowbird on a bluebird Thursday.

For adventurous intermediate/advanced skiers, Snowbird really is a perfect mountain to explore. The option to hop in an out of bumps or groomers on so many runs creates a sort of choose-your-own-difficulty adventure. Plus, the terrain here is just massive, and when blessed with low crowds, the impressive lift infrastructure can have you racking up vertical feet and exploring some serious terrain, at a blistering pace.

Unfortunately, we didn’t score the true Alta experience, considering the five day snow drought. That said, the magic of Alta is a powerful mystique, and we still found ourselves loving the day, despite having to work a little harder to find enjoyable conditions.

As expected, a multi-day trip to Utah’s Cottonwood Canyons did not disappoint! All in all, the group agreed it was a fantastic trip, and these world class resorts adopted some new huge fans!