There’s just one problem. Mammoth isn’t easy to get to.

The mountain’s far away location does have some benefits – mainly quiet slopes (during the week… weekends are another story!) and a true feeling of skiing a “destination” ski resort.

Fear not! And put away that aspirin. Because SlopeLab’s Mammoth Travel Guide has got you covered!

Where is Mammoth Mountain?

Mammoth Mountain sits in Central California, on the eastern side of the mountains close to the Nevada border. 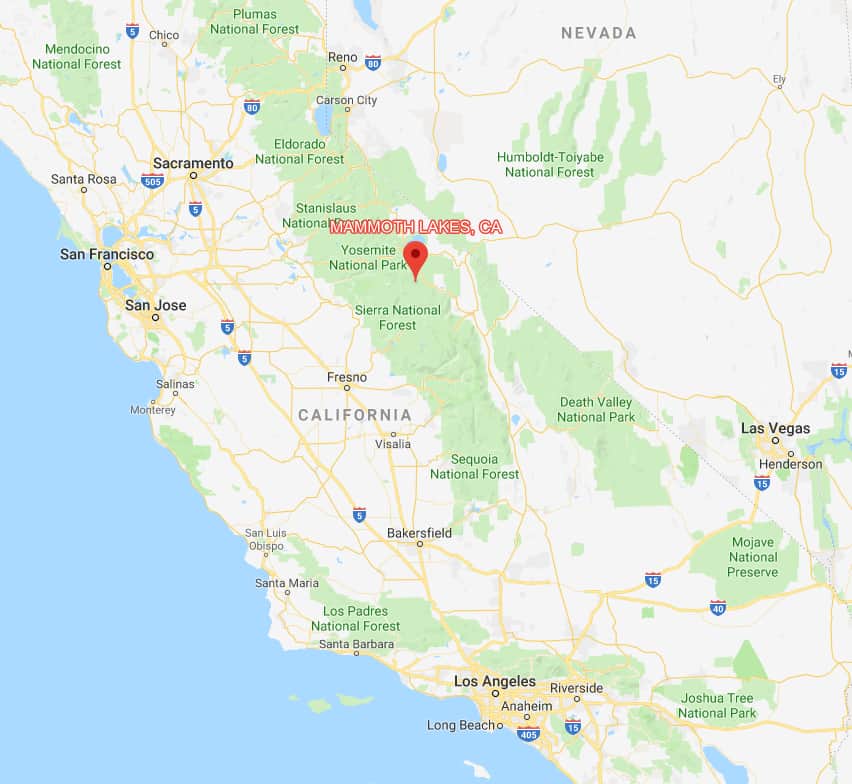 In good weather*, drive times are as follows:

*However, winter driving times are often very different! Read on to find out why…

To make the convenience even more… convenient… all the official Mammoth Lodging Properties run free shuttles from the airport to the hotel. This includes the Mammoth Mountain Inn, Juniper Springs Resort, The Village Lodge, and Tamarack Lodge.

For those staying in other locations, several taxi and shuttle services run from MMH to anywhere in town or around the mountain. These all-weather shuttles and cabs include MAWS, Mammoth Taxi Service, and Mammoth Lakes Cab Service. (I priced out a 7-seater private SUV service with MAWS for just ~$9 a person.)

This incredible convenience does come at a notable risk though. Mammoth’s airport is prone to significant snow and wind delays and closures.

In fact, this data from the department of transportation shows that since 2010, 30% of flights into MMH were delayed, and flights were cancelled roughly 15% of the time. In especially snowy years, like 2016, 30% of all flights into Mammoth Yosemite Airport were cancelled!

If you’re worried about MMH’s delays/cancellations and instead decide to drive yourself to Mammoth, keep in mind that in poor weather, California and Nevada enforce pretty strict traction control laws.

Depending on the storm, California imposes three levels of tire chain requirements:

So, how often are those restrictions in place?

To know for sure, you should check the Caltran website. But in general:

Nonetheless, anyone driving during California winters should be prepared for the possibility of needing chains, especially if you’re in a two wheel drive rental car or even a 4WD vehicle with cheap rental tires.

The Trap Option – Driving from the Bay Area (Bad idea!)

Based on Mammoth’s location, many would-be travelers to Mammoth make the common mistake of planning their winter trip starting in San Francisco, San Jose, or Sacramento. After all, Mammoth looks close enough to these areas to make the drive appear reasonable.

In order to get to Mammoth Mountain from either of these three airports, travelers would have to drive through the Yosemite area. This main route (Tioga Pass) is CLOSED DURING WINTER. (Here’s a good link to the historical openings of Tioga Pass… it usually opens in May or June.)

Because of this, you’d have to drive from the Bay Area up to Carson City/Reno. Total drive time? 6.5-7+ hours.

At just over 3 hours, Reno to Mammoth is the shortest drive. (Aside from flying directly into Mammoth.) 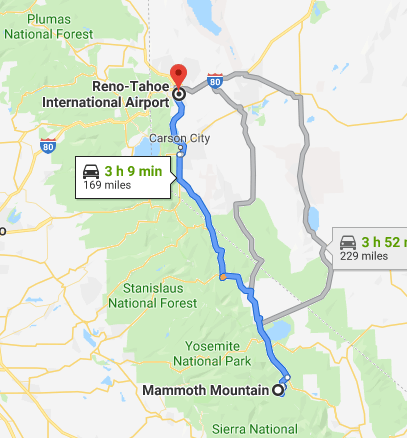 The road begins as a 4 lane interstate before turning into a 2 lane highway for the last two hours of driving. The highway (395) is heavily traveled and well-maintained. However, it does snow frequently in this part of the country, and those snowstorms tend to be of the California “feast of famine” variety – either dry as a bone or huge dumps in excess of 1 foot an hour.

Anyone making this drive should be prepared for winter weather, because things can get a little hairy on stormy days.

On those days, California Transportation will enforce tire chain checks along the route. High wind is also a possibility – tipped over semi trucks can and do happen, which usually shuts down the only route for the rest of us. There’s also a few sharp turns throughout the drive, and at least one mountain summit to be aware of.

Mammoth Mountain is the preferred playground for Los Angeles skiers, who frequently make the relatively easy 5 hour drive on weekends. 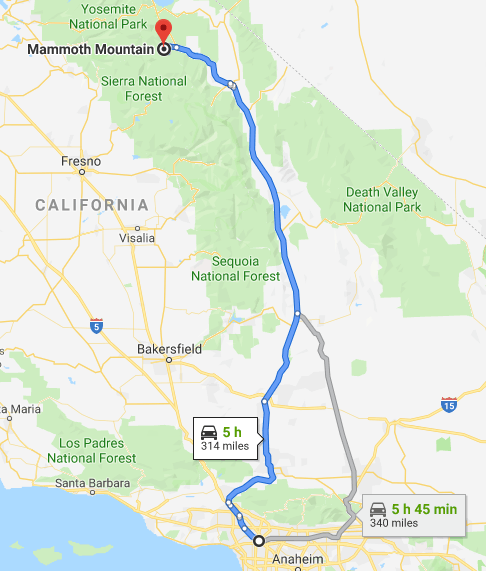 Although long, this drive is pretty straightforward overall. Almost the entire route is flat desert, with only the last 25 miles or so hitting an elevation that might have snow. (You should still be prepared for chain restrictions.)

One often overlooked option is to fly into Las Vegas, then approaching Mammoth from the East.

This drive is a little over 5 hours, but relatively easy and mostly through flat, dry desert.

This road (US-95) is mostly a wide 4 lane interstate with a divider. Much of this route is stereotypical desert driving, meaning it’s boring and you won’t have much to see. Keep an eye on that gas tank!

Similar to the Los Angeles route, you’re only likely to encounter snow during the last 25 miles or so.

So, what’s the best way to get to Mammoth?

As you can see, no route is perfect, and getting to Mammoth is mostly a game of trade offs.

For the most convenient option, flying directly into the Mammoth airport (MMH) is hard to beat. You won’t even need a rental car! That said, you do run a much higher risk of delayed or cancelled flights.

For the shortest drive, Reno is your best bet. However, this route is the most likely to encounter difficult weather.

For the easiest (but longest) drive, look into flying into either Los Angeles or Las Vegas.

No matter which route you choose, fantastic skiing awaits you in Mammoth! Safe travels!